This scenario centers on the collection of hydrographic data (CTD) using a LAUV (Xplore-2) during the course of 5-6 days along a specific transect in a region close to the navigation channel in the mouth of Sado estuary. The scenario days will be spread out along all the REP-Atlantic 17, and its focus is to have various samples of the same area over the course of a 10-15 day period in order to study the vertical structure and short-temporal variability of the region of influence of Sado estuary outflow during summer and the impact of warmer estuarine water in the coastal stratification. Moreover, all collected data should be used a posteriori to calibrate and validate numerical models implemented in the Sado estuary and adjacent coast. The possibility of the chlorophyll and turbidity sensors installation in the LAUV (Xplore-2) should be studied in a sense of convenience to maximize scientific opportunities, covering potential links between hydrographic and biological parameters.

The LAUV will perform the transect, present in Figure 1, over the course of 13 continuous hours. By doing so the data collected has the coverage of a full tidal period in the selected section of the ocean (about 12 hours and 25 minutes).

Additionally, in order to study the vertical structure of the velocity magnitude and direction in the region of influence of the Sado estuarine outflow, an Acoustic Doppler Current Profiler (ADCP) will be anchored along the planned transect. Again, this will allow to characterize in depth the temporal variations and vertical velocity structure, the surface and bottom currents changes within tidal cycles over the course of the mission and, afterwards, will also allow examining the accuracy of numerical models implemented in this region.

As an added feature there will also be deployed an ASV (Caravela) with an EchoSounder, a CTD and, if feasible, an ADCP covering the same transect, although not at the same time, with the purpose of studying small-scale differences of velocity profiles and evaluate sea surface temperature and salinity changes along the transect.

Moreover, a UAV (X2O-01) will be deployed from the PT Navy vessel in order to capture thermal imaging from the transect area during the LAUVs operation cycle. High-resolution data from X20-01 will constitute a detailed improving in the sea surface temperature observation during this scenario. Furthermore, it is possible other type of imaging payload will be on-board the UAV. This will be reliant on specific invited partners.  Nevertheless, due to the endurance limit of the UAV, this vehicle’s operation will be limited to flights of 40min total with even less amount of “time-on-target”. Still since all data will be collected within known timeframes and will be georeferenced and timestamped it can then be correlated with the data collected from the LAUV. 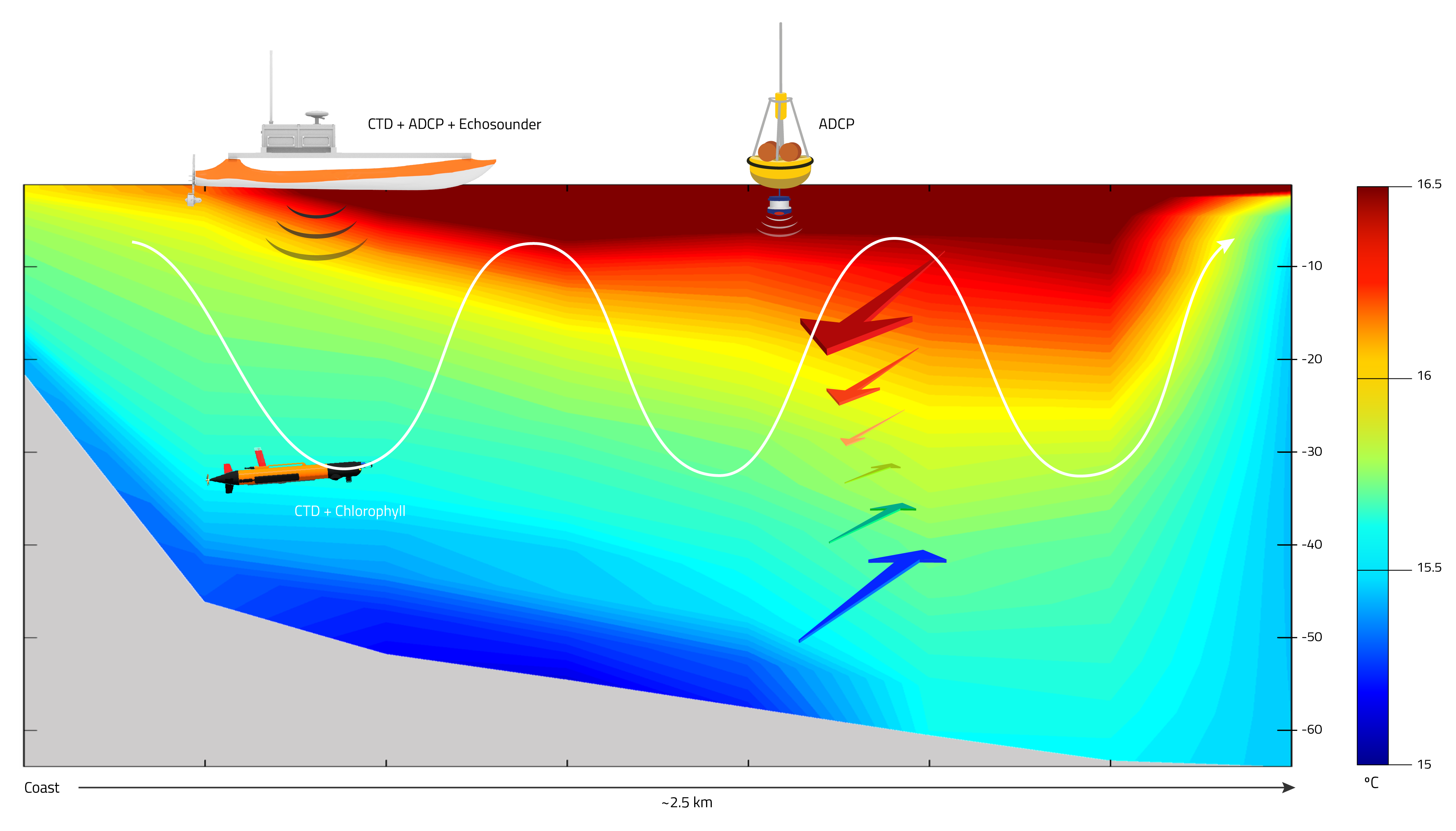 Finally, if the LAUV deployments coincide with opportunistic passages from Sentinel satellites missions from ESA:

And other NASA EOS missions such as:

Then it will be possible to have an idea of the synoptic ocean conditions of the survey (i.e. upwelling/downwelling events) and/or to examine in detail structures observed in the transect that were generated offshore (i.e. internal waves) or in other remote locations.

As seen in the map the scenario will take place south of Portinho da Arrábida which will present some difficulties logistically and technologically. A closer look at Figure 3 allows the analysis of bathymetric details of the proposed operation area. This in turn allows a more detailed planning for resource positioning as well as the ability to foresee and counter logistical challenges.

The envisioned transect will cross a vessel transit lane so steps must be taken to care for the systems’ safety during the long operation time. A vessel from PT Navy, tentatively NRP Cassiopeia, will be stationed during the AUV operation time to assist in case of emergency. It can also function as an operation base station if necessary. Nevertheless operations will be carried out by a remote team located either in Troia, Sesimbra or Alfeite Naval Base making use of satellite communications.

Furthermore, to allow the PT Navy vessel’s team, as well as the main operation team, to monitor the LAUV’s progress during its underwater run a Manta Gateway will be anchored on a buoy near the midway point of the transect, seen in Figure 3. This Manta will be connected through WI-FI to the PT Navy vessel, through Iridium and or GSM/3G/4G to the main base station and acoustically to the LAUV thus allowing a near continuous monitoring of the vehicle’s state.

To reduce the LAUV’s trajectory error, while underwater, long baseline (LBL) acoustic positioning system will be deployed in the operation area. This will minimize the effects of not only the natural vehicle drift but also the drift that will incur due to the perpendicular current from the Sado’s estuarine outflow, as can be seen in the forecast image present in Figure 3. Although one of the LBL beacons will be anchored in a shallower part of the area, which might lead to some loss of LBL positioning efficiency due to the shadow created by the incline in the underwater terrain, the use of this acoustic positioning system will still substantially increase accuracy for navigation.

The ADCP, placed at about the half-point of the transect, will be anchored with an additional standalone system (EchoBox) composed by an EchoSounder connected to a low power computational system (Raspberry Pi 2) and an acoustic modem (Seatrac). This standalone system will be anchored for the whole duration of the exercise as well. Although it will remain in “sleep mode” for most of the operation cycle it will be able to be woken up by an acoustic trigger message sent by any vehicle in range that wishes to activate the EchoSounder module and collect its data.  As an added effort a structure will have to be built in order to house the ADCP for the anchoring procedure. This structure will accommodate it in such a way that it can prevent the ADCP to tilt or move after it has been placed at the desired area.

As we are using medium sized hexacopters (X2O-01) to collect thermal imaging from the transect area its deployment and recovery must be made from the PT Navy vessel. The nearest land point is too far away to guarantee a useful amount of “time-on-target” due to the limited vehicle flight endurance. Moreover, with deployment and recovery being done from the PT Navy vessel all vehicle support resources can be centralized on the same location as well as be performed by the same operational team.

Finally, following the same guideline of the LAUV’s operation scheme, the UAV’s operation will also be carried out by a remote team located either in Troia, Sesimbra or Alfeite Naval Base making use of 3G/4G communications.  Nevertheless, due to the high dynamic of the UAV, compared to the LAUV, the aerial operation will be monitored closely by the team stationed at the PT Navy vessel, through a Wi-Fi link.